By Chris Stiles
Published with permission from The Clayton Tribune 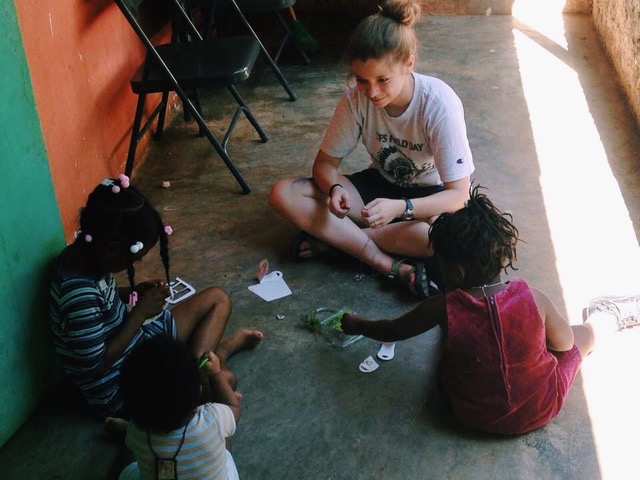 From the time Madison Ball was young, her mother Melissa always told her, “everyone has a story.”

Now 17, and a rising senior on the Tallulah Falls School track and field team, learning those stories and getting to share them has become Madison’s passion, as shown in her simultaneous devotion to Haiti and photography.

“The quote that’s said around my house every day is ‘everyone has a story,’” Ball said. “So if we’re complaining about someone who got on our nerves that day, she looks us in the face and says ‘everybody has a story.’

“So, just thinking through that in each situation, and thinking, ‘ok, i don’t know where they’re at, are what’s going on in their life right now, so I need to learn to love each person where they are,’ and I think that my mom teaching that as I grew up has really inspired me, and led to a lot of my beliefs.”

Ball was involved with missions from age 4, as her father, Jason, ran Camp Covecrest in Tiger, but says her life changed at age 14 on a mission trip to Haiti. Covecrest’s parent organization, Life Teen, had opened the Saint John Paul II Center for the New Evangelization in Haiti after a magnitude 7.0 earthquake devastated the island in 2010, and after Ball got the opportunity to go, she felt a passion to help the Haitian people.

“I became inspired and decided that I wanted to spend a large amount of my life involved in Haiti, so in the future, I plan on living there at some point,” Ball said. “I worked (in Port-au-Prince) with the Missionaries of Charity, which is the religious order that Mother Teresa founded. And I just really came to realize that there’s a large number of people who are overlooked, and their stories aren’t told. Missionaries go down to care for them, but rarely are they given a voice, and the opportunity to share their story, so that’s just something that really touched me, and I began to realize that if you knew everybody’s story, you would not hate a single person.”

Her time in Haiti has included doing a little bit of everything to help the Haitian people.

“We do a lot of home visits, which entail going and reading scripture and praying with the people there, and listening to their stories and their needs,” Ball said. “I worked with Missionaries of Charity in their hospital, and we sat with the women in the hospital and just painted their nails and put lotion on them. We also helped paint buildings on the base, repair and expand, and also just spending time with the people there and putting on retreats for their youth groups.”

Ball’s interest in photography began at age 9 when she got her first camera, saying she didn’t put it down. For several years she was self-taught, before taking a photography class in school last year.

“It was very challenging and stretched me as an artist, but in the end, we had a photography contest and I won, which is incredible,” Ball said. “And I think it just brought a whole new aspect to it and learning, of the way the camera functioned that I didn’t even know before. Currently, I don’t have enough time to do it as much as I’d like, but in the future, I’d like it to become a priority, because of the power that photography has.”

Ball says she wants to use her passion for photography to tell the stories of the people of Haiti, and become “a voice to the voiceless” in humanitarian photography.

Ball has run track at Tallulah Falls since sixth grade and realized that the reason she keeps returning to the team year after year is not for the competition, but for the sense of family and community that the team provides.

“The thing that I realized was I was not necessarily as passionate about the competition as I was about my teammates, and the reason that I ran track was for the unity of the people in it and being in the trenches with a group of people who are actually incredible,” Ball said.

Ball, who runs the 200-meters and the 400-meters and is part of the 4x100 and 4x400 relay teams, said the lessons she’s learned while running for Coach Scott Neal has helped her in her missions work, and her life in general.

“I think the lessons that my coach has taught me throughout it is really enlightening to life in general,” Ball said. “He taught me how to be a leader, but how to listen to those around me, and take in ideas, and really how to put my faith into the work that I’m doing, whether it’s living in track right where I’m at or thinking of a global mindset, and really it has taught me leadership.”

Neal agrees that Ball has used the lessons she has learned in track and field in her other pursuits.

“Madison is one of those participants who realize, even now, the real, lifelong reasons athletics can be critical to a person’s development, and to the representation of a school,” Neal said. “Family — both her natural family and her track and field team family — is of utmost importance to her, so she is innovative in creating ways for a team to bond. Madison is a critical thinker whose experiences help her to be extremely respected by teachers and students alike.”

Ball has also overcome adversity in the athletic arena — she played basketball in middle school but stopped after an ACL and meniscus injury threatened her track career — and also helped the varsity and JV basketball teams as a manager in her sophomore year.

“I very much did enjoy the service opportunity of (being a manager), and it was very eye-opening to our managers (in track) and the amount of work that they put in, which allowed me to grow in gratitude for sure,” Ball said.

As she prepares for her senior season on the track, Ball is already thinking ahead to the legacy she and her teammates will leave for the Indians’ younger runners.

“This season I really want to create an environment for our freshman that allows them to take up what we’ve already started, as we leave, and that they would begin to fulfill the legacy of family before competition,” Ball said.

Ball is interested in attending Clemson University or Western Carolina University after she graduates from TFS next spring, and wants to major in international business to help with her mission work, as well as an ultimate dream of serving as Secretary of State.

Before college, however, she is looking to spend more time in Haiti, as well as doing more mission work here at home.

“(A goal is) just living missions in my daily life, finding a domestic mission,” Ball said. “I’m currently praying about taking a gap year before going to college and living in Haiti. I’m going to contact the Missionaries of Charity and see if they would put up with me for a year. Other than that, in the future, it’s just going to be led by God. I can see my family moving there at some point when I have a husband and kids or running it stateside.”