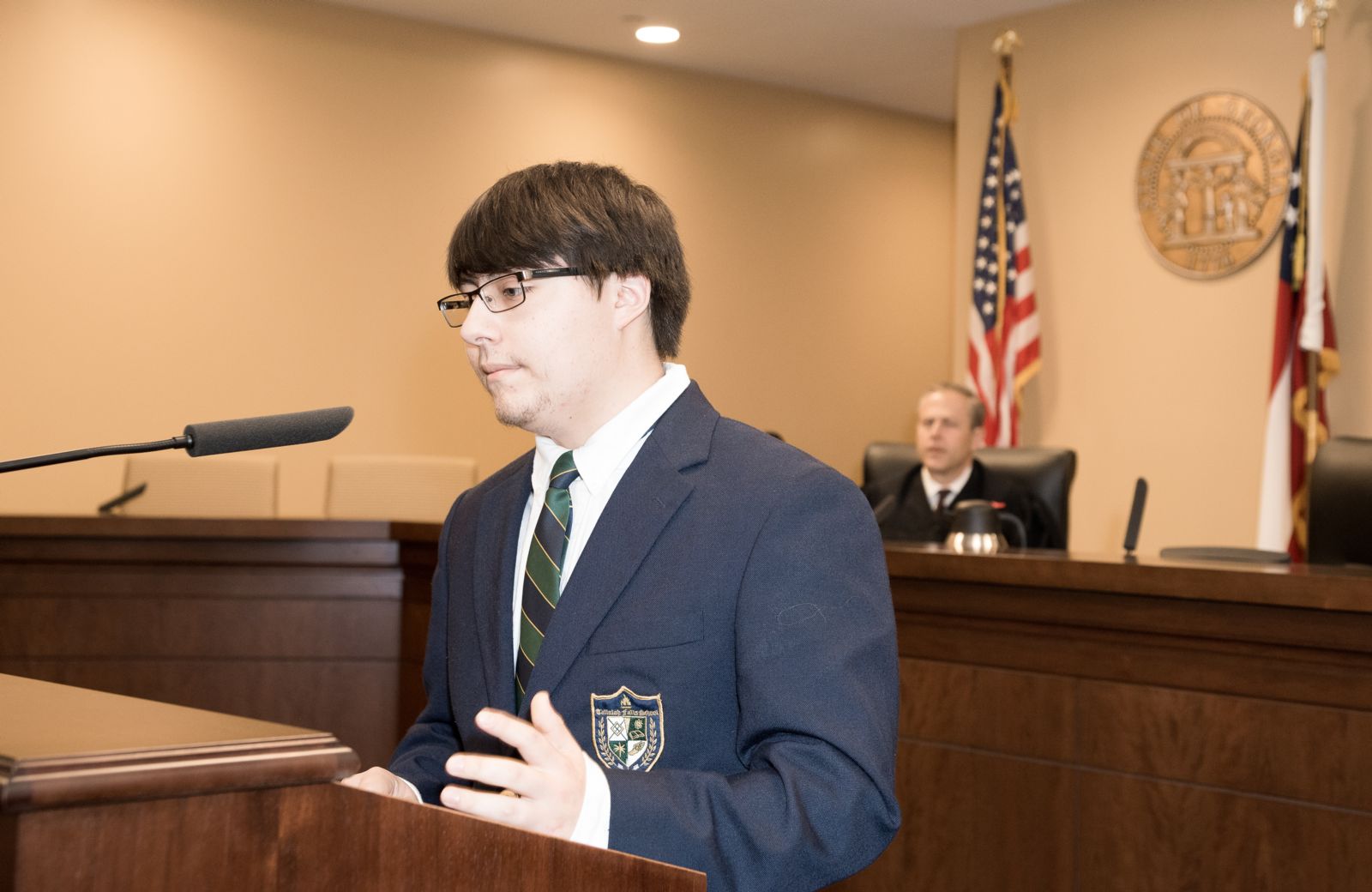 Tallulah Falls School seniors had a day in court when the members of the Class of 2017 visited the Habersham County Courthouse on Nov. 28.

Mountain Judicial Circuit Superior Court Judge B. Chan Caudell provided an overview of courtroom procedures and explained the role of key personnel before inviting the students to observe a child support hearing.

He told students there were two opportunities for citizens to participate in government – voting and jury duty, urging them to exercise both duties responsibly. Regarding jury service, he said it important to report when called.

“When you are dealing with someone’s freedom, you have the ability to take that freedom away – it’s very serious,” Caudell said. “When you receive a summons for jury service, it’s important you heed it.”

He explained the court system was one of advocacy.

“It’s about discerning what the truth is through both sides doing the best they can,” he said.

Several of the students asked questions.

“Why are you a judge?” asked Sydney Porter of Lawrenceville.
“I enjoy it, No. 1,” he said. “...I feel like I get to help people…I to have to make tough decisions...I’m blessed to have a chance to put my training to work...it’s a chance to serve my community. I appreciate it very much.”

Appointed by Gov. Nathan Deal, the Habersham County native will mark five years on the bench on Dec. 11.

Caudell told students under Deal’s tenure, the number of offenders in Georgia prisons was trending down. He explained how criminal justice reform, specifically, accountability courts, has helped.

"By treating non-violent, addicted offenders in our accountability courts, we are not only keeping our prison costs down, but also seeking to have a positive generational impact on families," he said. 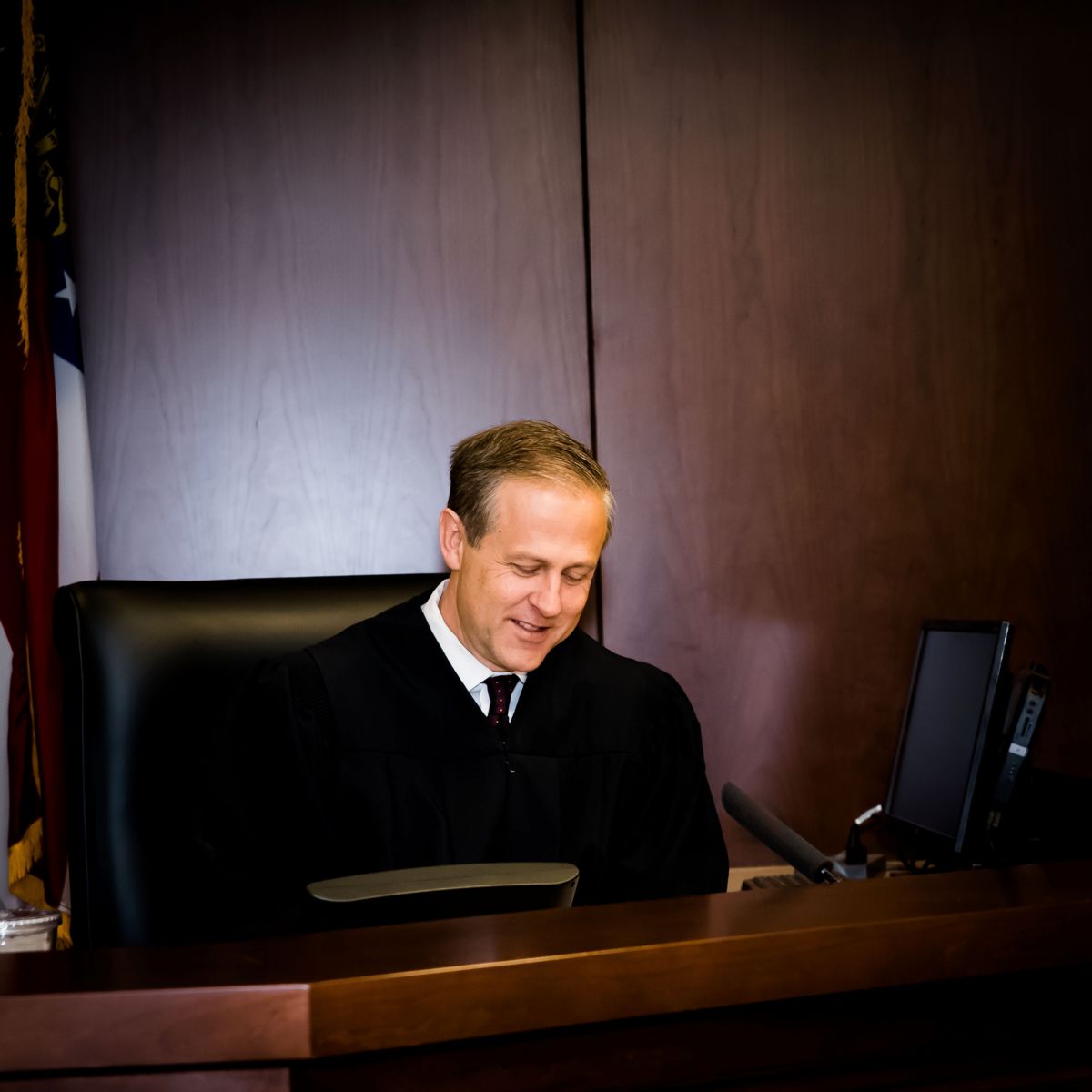 One senior provided unique insight; Isaac Elias of Demorest spent 30 hours working in Judge Caudell’s office last summer. Seniors are required to complete a capstone project in an area of interest – Elias is interested in a career in criminal justice, ultimately planning to attend law school.

“I think the one thing that left the biggest impression on me was Judge Caudell's ability to maintain a neutral attitude in the courtroom regardless of what was being dealt with,” Elias said. “It was also nice to be in an environment where people were eager and willing to answer the questions I had.”

Observing from the gallery during the hearing made an impression on many of the seniors.

“I felt as if I was getting to see what Mrs. Barron had taught me in class,” said Kaylee Baker of Demorest. “Learning in a classroom is good for the basics, but getting to hear from these professionals, I learned other aspects of this job I had not heard in the classroom. I enjoyed getting to have an opportunity to watch a case instead of just watching a television show about one.”

“This is the second year that Judge Caudell has spent time with our seniors and allowed the senior class to sit in on a hearing. Meeting government officials provides a unique learning opportunity and helps students apply lessons from the classroom,” Barron said. “Judge Caudell is open and honest with our students, which promotes learning and participation in our government.”

Caudell is the third in a series of government officials who have spent time with the seniors so far this year. Georgia Court of Appeals Judge Brian M. Rickman and former Georgia Governor Sonny Perdue have also addressed the class of 2017.

“Experiential learning is emphasized at TFS and having students hear from community leaders is an important part of the student experience,” said Head of School Larry A. Peevy. “We are grateful to Judge Caudell and so many others who have invested in these important life lessons for our students.”