Sixty-one accomplished young people took next steps toward a successful future at Tallulah Falls School on May 12 at the 2017 TFS Commencement Ceremony.

An enthusiastic and appreciative crowd of parents, relatives, faculty, staff and students filled the school’s beautiful new Student Activity Center as the proceedings were held there for the first time.

Newly-appointed U.S. Secretary of Agriculture George Ervin “Sonny” Perdue III, ninth in succession to the president, delivered remarks during graduation. The former Georgia governor has a special connection with the school as his granddaughter, Sunni Brett, is a member of this year’s graduating class. It was Perdue’s first trip home to Georgia since being sworn in by Associate Justice of the Supreme Court Clarence Thomas.

Perdue spoke first of the differences in the world today, specifically referencing the speed of communication through technology.

“To remind all of us, you young people and you young at heart, that life moves very quickly,” Perdue said.

He conveyed three life lessons for students to take with them as they leave TFS.

He challenged the graduates with his r 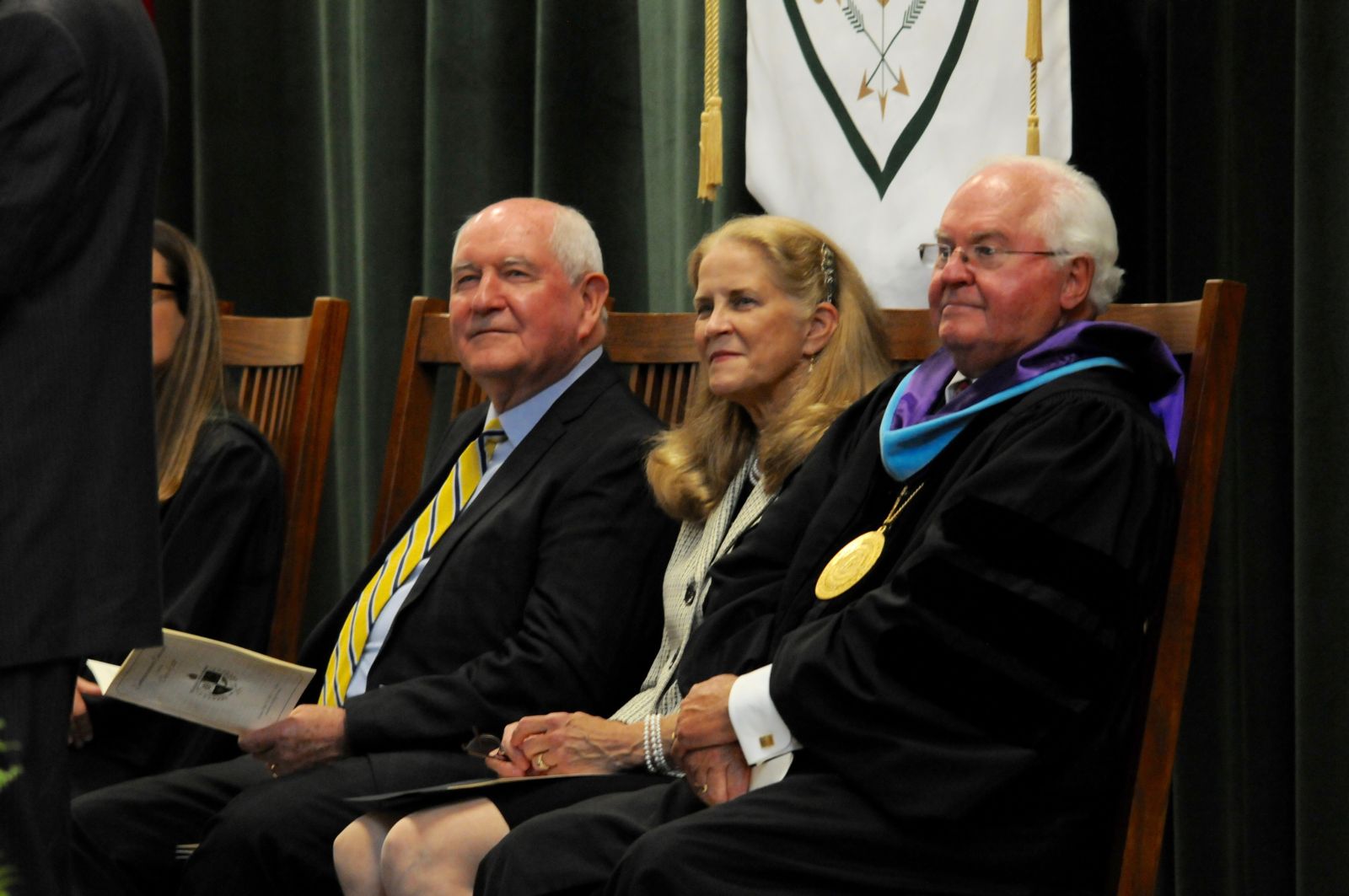 emarks, asking them why they should ‘do right.’ “Doing right always matters...when you do that, everything else begins to take care of itself,” he said.

“After you do right, do good...Doing good is simply a Georgia way of saying 'do whatever you do and do it well'...To do good, you have to carry an enormously strong work ethic...what will differentiate you is the degree of sweat equity that you are willing to put in.”

The final lesson, he said, is to have a sense of urgency.

“Do it now. You don’t have to wait,” he said, explaining that his closest advisors as governor and now as agriculture secretary were in their late 20s and early 30s.

“As a young person, you have the opportunity to make a demonstrative difference in the world around you – now,” he said.

He urged the group to find mentors and and role models and to cherish those relationships.

“What are you waiting for?” he added.

TFS Board of Trustees member Rev. James E. Turpen, Sr. provided the baccalaureate address. Turpen, who was born in Tallulah Falls and graduated in 1955, is a former TFS Dean of Students and has a unique relationship with the school that extends more than 75 years.

and families as they recalled the hard work and many sacrifices required to reach this milestone as well as the challenges and opportunities that lie ahead. Each speaker expressed gratitude to classmates, teachers, staff and especially their families for the part they played in their success.

One of the highlights of commencement was delivered by graduating senior Tori Sesam, an accomplished vocalist who wowed the audience with a soulful rendition of “Lean on Me.”  Sesam’s performance drew a standing ovation from her classmates and generated an upbeat vibe that extended throughout the commencement program.

Diplomas were conferred by President and Head of School Larry A. Peevy. TFS Board of Trustees Chairwoman Amy Atkinson served as part of the stage party to congratulate the new graduates. Secretary Perdue was given the honor of presenting a diploma to his granddaughter, Sunni Brett, and TFS Board member James C. Weidner presented a diploma to his son, co-valedictorian Michael Weidner. TFS Upper School Academic Dean Kim Popham read the names of each graduate as they walked across the stage.

“I am very proud of our seniors this year,” Peevy said. “I truly believe they will all have very bright futures if they use their talents and skills learned at TFS and remember that the true secret to their success in life has everything to do with how they continue developing their character and maintaining a positive attitude.”