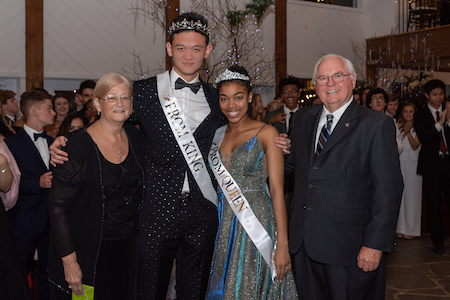 During the 2019 Tallulah Falls School Prom, the names of two one-night-only monarchs were announced.

President and Head of School Larry A. Peevy revealed the names Xing Fan of China as Prom King and Nyah Williams of Cornelia as Prom Queen. The excited pair joined the ranks of the school’s archival royal court.

King and queen are selected via secret ballot by members of the senior class.

Williams shared a traditional first dance with Peevy, with Fan joined on the dance floor by TFS Board Chairwoman Gail Cantrell.