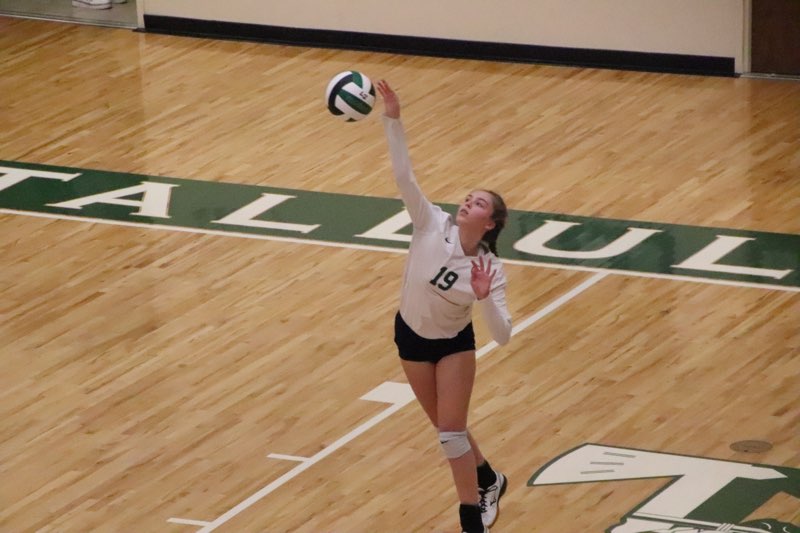 The Lady Indians came into Thursday's region semifinals match already with a punched ticket to the state tournament. However, a win meant earning a spot in the region title game, as well as a better seeding for the state playoffs. Tallulah Falls School wasted no time, advancing with a 3-0 win over visiting George Walton in straight sets.

The first set saw the Lady Indians get off to a quick 5-1 lead before George Walton pulled within 5-4 and held strong even to 15-14. TFS went on a run to open up an 18-14 lead, forcing GW to use a timeout. The girls then drove the lead to 22-5 and to the eventual 25-17 win. Katy Corbett blasted seven kills, while Sarah Jennings had four in the first set, and Barrett Whitener two. Nancy Fisher, who had a pair of aces, did well when serving.

The second set again had TFS up 6-1 out of the gate to force a timeout, and widened the gap to 14-5 and 29-7 before yet another GW timeout was called. The visiting team staged a comeback attempt when down 24-7, scoring five straight before the Lady Indians put it away, 25-12. Whitener played great at the net, while Fisher, Rebekah Jennings, Allie Dalton, Sarah Jennings, and Evette Corwin dug out many balls off the floor. Corbett had seven kills in the set, while Sarah Jennings and Abby Carlan had two each.

The third set was much tighter early on, as the teams were knotted up at 8-8 before TFS went on a run. Sarah Jennings had a fantastic ace that gave the Lady Indians a 13-8 lead and led to a timeout. Rebekah Jennings had a great run at serve, recording multiple aces as TFS won 25-18 to claim the match.

The win moves the Lady Indians to 18-13 on the season, as they advance to Saturday's region title match. The girls have secured a sixth consecutive state playoff berth.