The same but different: Tallulah Falls School’s dynamic golf duo push each other to greatness

Sixth-grader Maggie Jackson was forced to hit a shot from behind a tree in practice. She was nervous as teammates  – including Brinson Hall – looked on. After she took the swing, the ball hit a tree and ricocheted over her head. She was mortified. She immediately took her next swing. It was the same result. Rather than get rattled she and her teammates simply laughed.

“I eventually got the ball out of the woods, but I wouldn’t have traded that moment for anything,” Jackson says. “I knew then that I’d met some of my closest friends.”

“Brinson is one of my closest friends,” Jackson states. “I think one of the cool things about our relationship is that without golf, I'm sure we'd still be good friends. Playing on a team, though, really gave both of us time to get to know each other and pull for each other. I feel her successes and her valleys as I'm sure she feels mine. Truthfully I can't imagine my life without her.”

The rising senior golfers stormed onto the varsity scene as freshmen in 2018. Currently, the dynamic duo holds or is part of all TFS golf records. Both are First Team All-State honorees. In short, they are a thread embedded deep in the DNA of Tallulah Falls School, defining what the school exemplifies: greatness in character and athletics.

"We both practice and prepare in different ways, but when we go to compete, we are both playing for each other and the team as a whole." -Maggie Jackson

Consider this: Jackson won the Area 2 tournament as a freshman in 2018 and was third in 2019 as a sophomore. Hall was the Area 2 runner-up in 2019 and finished in the top 10 at state as both a freshman and sophomore.

Golf has long been deemed an individual sport. While in many ways that’s true – one would be hard-pressed to find a more elite pairing that supports one another so greatly, even if they’re both battling for low medalist honors.

“Maggie and I have such a good friendship, we are able to encourage each other in every tournament we play in,” Hall says. “We are both aware of the competition between us, and I believe it fuels us to do better and be so close to one another. We do not let golf get in the way of our friendship, which makes for an amazing team that has each other's backs. I am blessed to be able to have such a talented teammate that will challenge me to do better. Because of golf, I was able to gain an amazing life-long friend that I get to play the sport I love with.”

Coach Allen Campbell has had a tall task in deciding his Team MVP in each of the past two seasons. He awarded that hardware to Hall in 2019 and Jackson in 2018.

“They have pushed each other since middle school,” Campbell says. “One will seem to take the lead as the No. 1 then the other will step up her game and catch back up or pass. They have continually improved from one year to the next. Each new season I tell them It will be hard to break the records they set last season and then they go ahead and do it. It has been a great experience for me as their coach to watch them progress and achieve their goals.”

Tension typically surrounds such teams with such tight competition, but Jackson doesn’t allow it to creep in.

“Since we're both playing and competing for the same team, there really isn't any tension at all,” Jackson states. “We both practice and prepare in different ways, but when we go to compete, we are both playing for each other and the team as a whole. Whether I have scored well or not, I always hope that Brinson plays her best. In any team, there needs to be some healthy competition. It only fuels us both to do our best.” 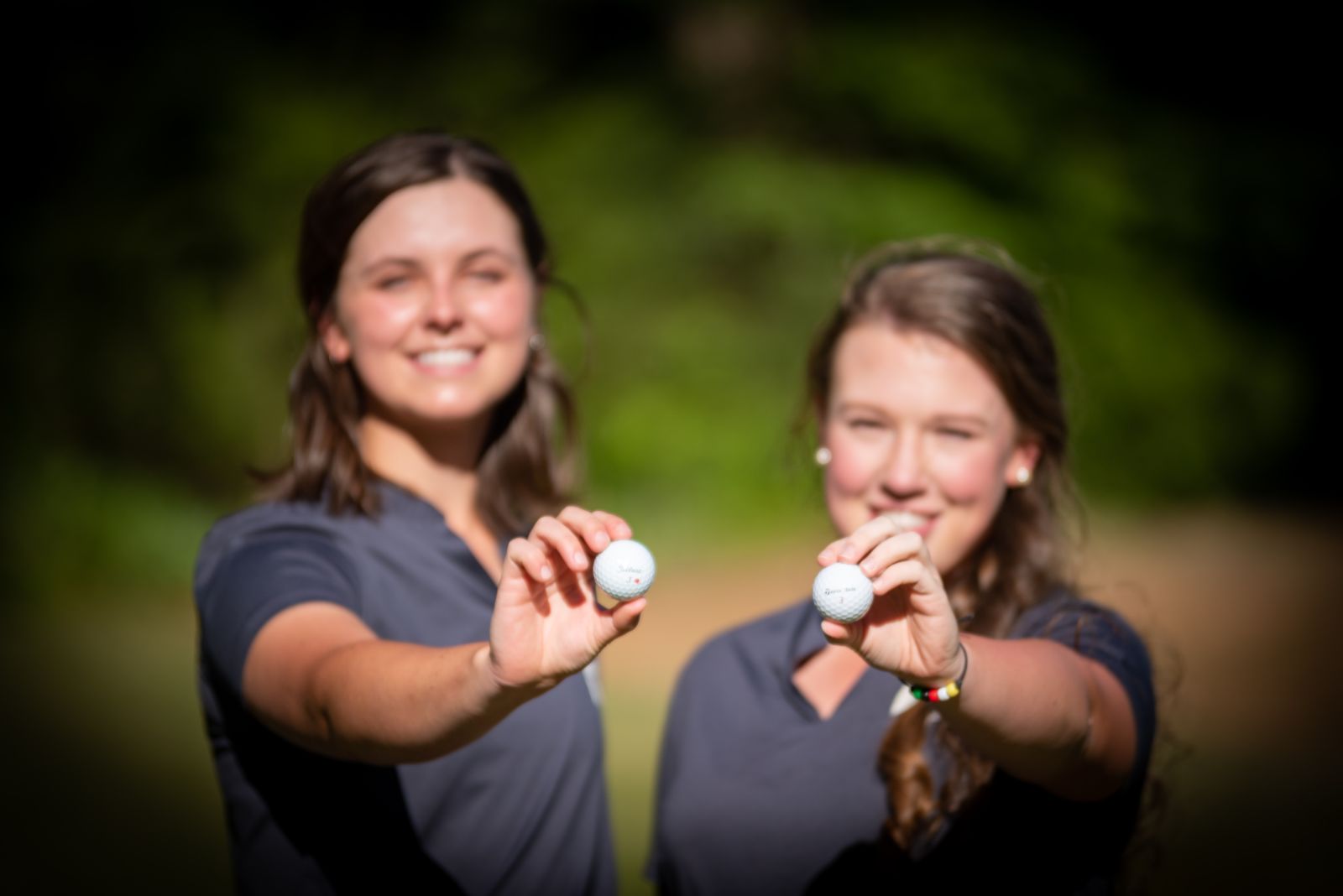 Hall and Jackson might be alike in many ways, but their future aspirations are quite different. Jackson seeks a liberal arts college education with an opportunity to play golf while pursuing a career path in environmental studies. Hall prefers to play golf at a larger university and aspires to a career in international relations. Her interest in politics, foreign policy and government stems from the same draw that brought her to TFS.

“I believed from the beginning TFS would be a school where I would be able to thrive,” Hall says. “It would push me to be a better person, student, and athlete. I loved that it was such a diverse environment and I would be able to learn more about the world.”

Thriving at Tallulah Falls School is something both girls are determined to do.

“‘Bloom where you are planted’ is a quote that motivates me not only on the course but in every aspect of my life,” Hall adds. “It is saying to give 100-percent in everything you do.”

Hall is making the most of her time at TFS, as is Jackson. Jackson carries a 4.48 weighted GPA, and Hall a 4.41. Both are heavily involved outside of just golf. Jackson has participated in three sports in her time at TFS (golf, swimming, volleyball) and is a member of the Fellowship of Christian Athletes (FCA), National Honors Society (NHS), National Arts Honors Society (NAHS), and a youth deacon at her church (First Presbyterian Church) and on the Habersham Junior Chamber Board.

But for all these comparisons of two of the best golfers in TFS history, Jackson isn’t one to compare herself to others.

“After the first couple of years of competing and practicing consistently, I noticed there were several other players my age who were much better than I was and it created some insecurity in my game,” Jackson says. “In time I realized golf is about building and molding your own game, not trying to be better than the next player.”

That philosophy has served her well in recent years. She points to her go-to, Philippians 4:11, a Bible verse that challenges contentment as her mantra. Greatness is a process for Jackson — one that brings about humility, patience, and character. There is a great deal one can learn from the sport. 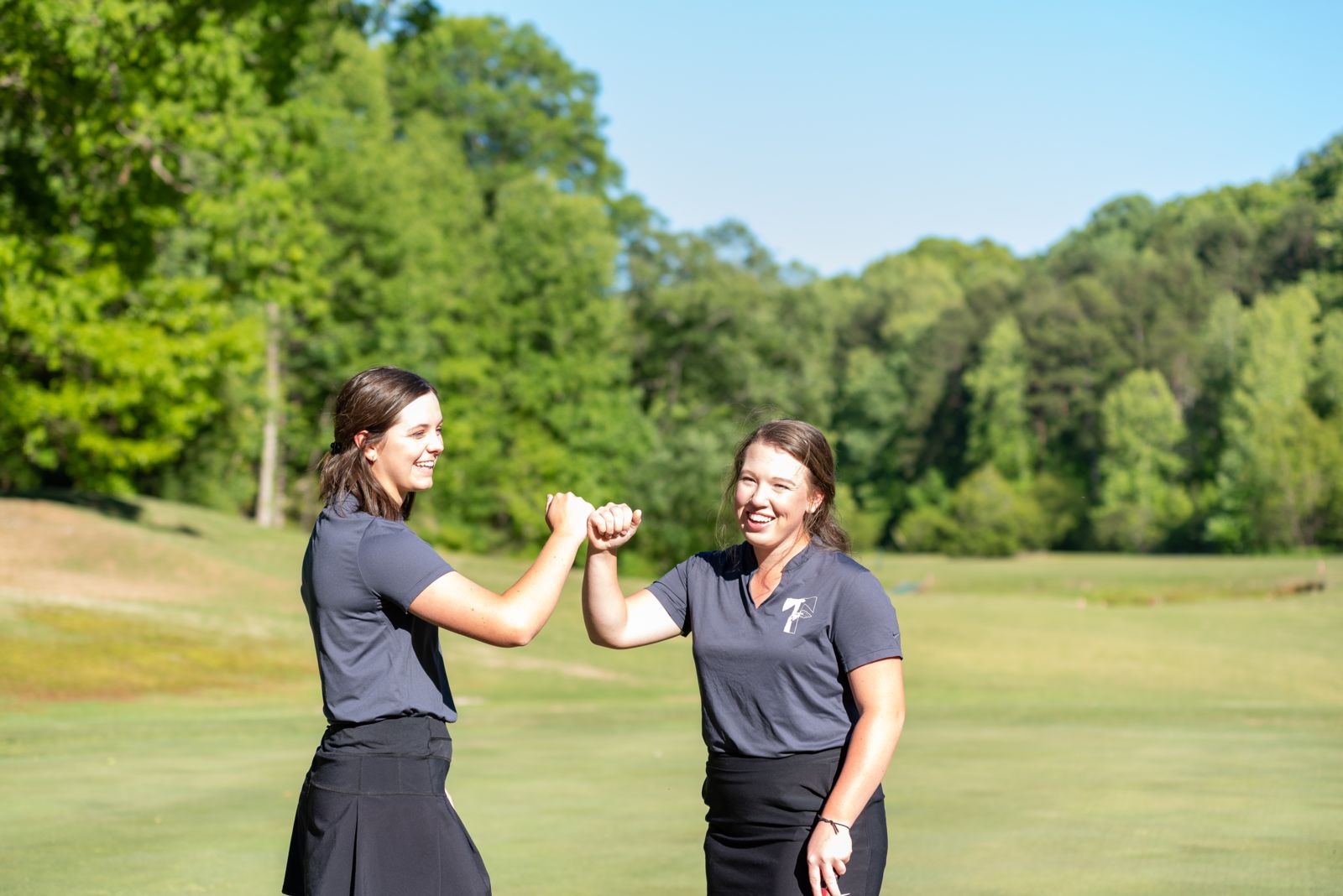 “I believe that no matter what situation you are put through, God wouldn't have put you there unless there was something to be learned from it,” Jackson says. “Golf is one of those sports that demands time and patience. Sometimes, you have to learn to be content with your process and trust that things will work out the way God intended them.”

Hall also uses the game to improve other areas of her life, and recognizes the value of her time on the links.

“I would tell my younger self to soak up every minute on the course,” Hall adds. “I never realized how much of an escape the golf course is until I was older. I would tell [my younger self] to use that time to better herself and push herself to be the best version she can possibly be. Golf is so much more than just a sport. It allows for time to meet others, to get closer to God, and to grow in mind and body.”

For both juniors, the sport of golf goes beyond just being a game. And it’s more than just an individual effort.

“Golf is said to be an individual sport, but I can't picture it as anything other than a team sport,” Jackson says. “Since sixth grade, we've competed together and pushed each other to play to our greatest potential. Although as a team we finish together, each person needs to put in a score to get to that finish. This has motivated me and I'm sure others on the team to work even harder to improve the collective outcome.”

With Hall and Jackson returning in 2021 as seniors, the horizon is brighter than ever for TFS on the course as well as on campus.