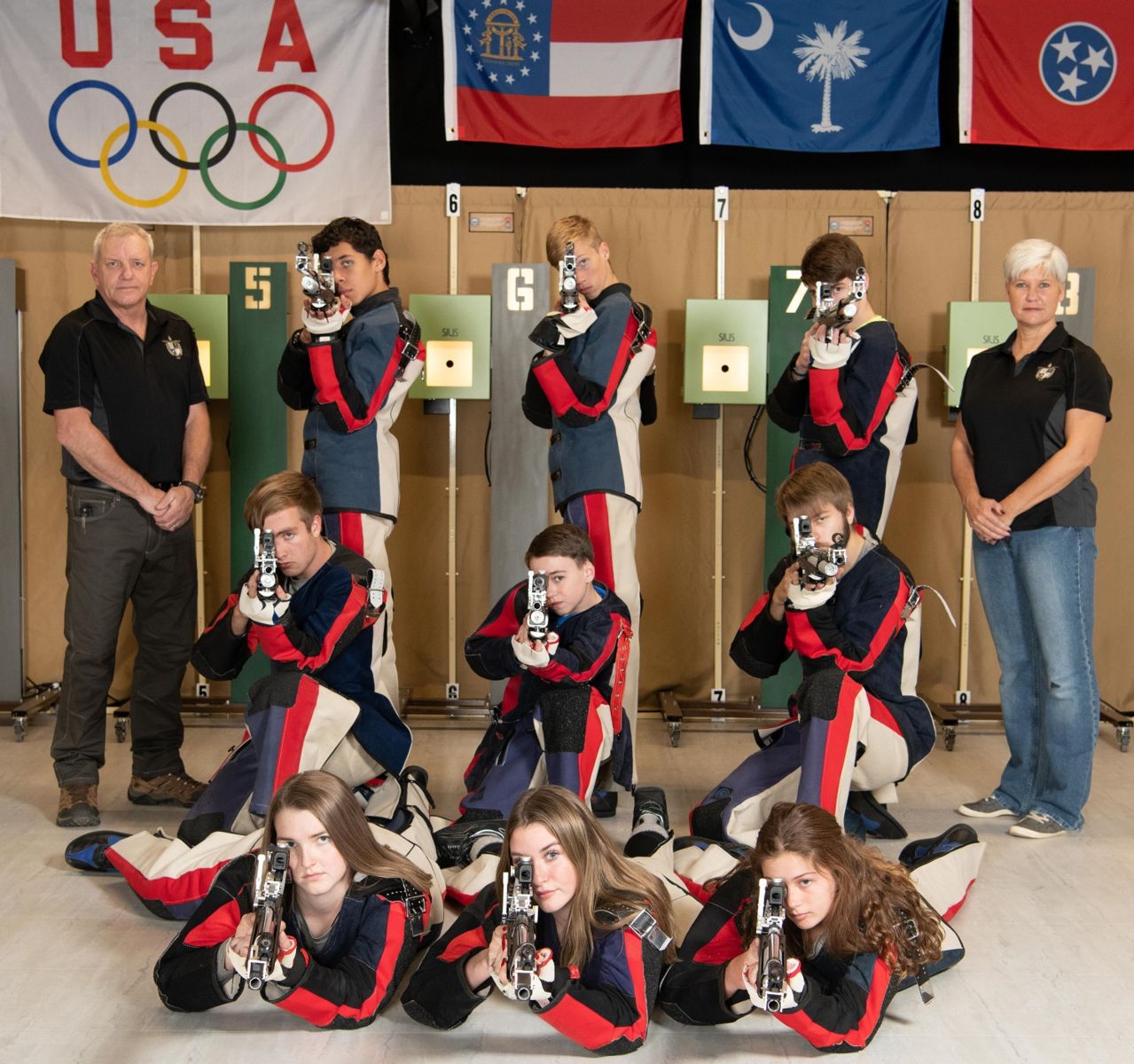 Nearly every athletic team was impacted throughout 2020-21 due to the lingering effect of Covid-19. However, Precision Rifle's way of competition was truly altered beyond any other sport.

Meets were done almost exclusively in virtual format, which changes the mindset of riflers and eliminates the natural competitive aura that surrounds any in-person match.

"The most difficult part of the season has definitely been getting in the match mindset," says senior Peyton Gunn. "Practicing at the school and having some of our matches there too has made it difficult to differentiate what is practice and what is a match. The times we do go somewhere else sometimes doesn't seem like a match to me, I try to see it as just more practice, and I'm not entirely sure if that's because of the current situation or if that's just me."

Gunn is one of three first-ever seniors for TFS Precision Rifle, as the roster was loaded with the trio of Gunn, Sam Stamey, and Ben Fisher. Others like Madi Perdue, Andrew Erwin, Jackson Whittle, Ethan Simmons, Brooke Hayes and Mar Crotta also performed well this season.

Stamey, who last year qualified for the Junior Olympics, shares how tough it was to not be able to finish out the Covid-19 riddled 2020 season, and it's impact on her senior year.

"This season has been difficult for the team's morale, not being able to attend normal matches takes what little normalcy this sport has," states Stamey. "For me, the most frustrating part has been coming into this season with the bitterness from how last season ended. I qualified for the Junior Olympics last season but the competition was canceled due to Covid-19. After striving for the goal of competing in the Junior Olympics for over six years and not being able to go was extremely hard so you can see how walking into this new season was difficult for me."

With the monotony of the way meets were done this year, it was hard to stay motivated. However, there's more than just the sport that brings the riflers back time and time again.

"Once you get to a certain point, it's very hard to improve in each position, and I think a lot of the veterans of the sport are feeling the effects of that," adds Gunn. "A lot of the time, there are good days and bad days, and other times you have those valleys for a lot of time in between those plateaus. It actually is quite hard to stay motivated, but easy at the same time. I see it as difficult because of the lack of improvement and how Covid has affected it, but it's also become a part of my life, that I go to practice and spend time with my coaches and friends on the team. The whole relationship aspect of the sport is what always brings me back to the sport, as well as being part of something that I contribute to, seeing as I'm one of the top four that goes to matches."

"I've stayed motivated by coaching the new shooters, given that this is my final year I don't just want to leave my own legacy but be able to train up the new class of shooters so the team stays strong long after I am gone," adds Stamey on what kept her going throughout 2021.

Through any adversity comes growth and development. The seniors led the way in putting a positive spin on what was a rough season.

"I highly commend the whole team for sticking around this whole year for how different and confined it's been," says Gunn. "A lot of teams and people have quit the sport because they have been working so hard at this for years just for it to be taken from them. Rifle is not easy to do from home like others sports because not many people do rifle as opposed to those other sports. Our matches are in Anniston, Alabama, and Griffin, Georgia, meaning we have to leave early in the morning and travel a long way to get there. I have learned that when it comes to things I am interested in and am willing to commit to, I will do anything I set my mind to. Sure, I'm not the best on the team, but for how long I've been doing the sport, I am very happy with how I've done in this sport. The team has gotten together to push each other to make us better. I am always fascinated and focused on my high scores, and I am with everything I do. Seeing my score go up and up, along with everyone else on the team, has been very motivating for doing better and keeping up at it."

"I can't speak for the whole team, but at our hardest times when our morale is the lowest, we depend on each other for strength," says Stamey. "It's not about the victory, but being able to work towards something together as a team and knowing that if all else fails we have each other and even if we didn't win we still made great memories with each other that we will carry with us."

Both Stamey and Gunn leave behind legacies at TFS, and they will miss far more than the competition.

"This sport hasn't been just a sport to me or my family - it's been a keystone and will continue to be," states Stamey. "I'm going to miss having a place I can come to where I know I have people that care about me and want the best for me. Being a part of the rifle community has molded my life and I will be eternally grateful for the impact that it has made on me as a person and I will carry that with me for the rest of my life."

"I'm definitely going to miss my friends and my coaches," adds Gunn. "I have learned so much and have had so much fun doing this sport and being in this environment that it's going to be hard to leave and be adjusted to a life without it."

Though Fisher, Gunn and Stamey all graduate from TFS, juniors Perdue and Erwin will be heavily relied upon next season to carry on the legacy of the first rifle TFS seniors. Under the leadership of coaches Tim and Kerry Stamey, this program continues to have an upward trajectory.