Tallulah Falls School senior David Medina made his commitment to Mid Atlantic Christian University official on Tuesday when he signed his letter of intent. Medina, of Oakwood, will continue his baseball and academic career for the Mustangs of Mid Atlantic Christian University, which is a member of the Eastern Metro Athletic Conference of the United States Collegiate Athletic Association, Division 1 in Elizabeth City, NC. 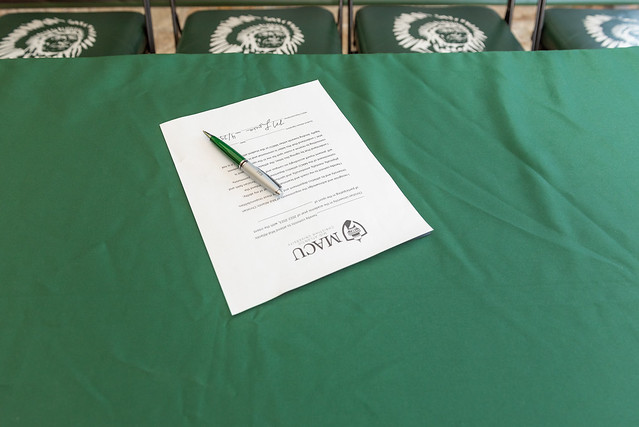 MACU’s head baseball coach is pleased with his new addition.

“We are really excited to have David join our team," exclaims Michael Louis.

At TFS, Medina has continued to fine-tune his craft and has made at impact on the Indians program.

“David has been a great addition to our program these past two years,” says TFS coach Justin Pollock. “He works hard, loves the game and loves his teammates.I am proud to see his hard work pay off with this opportunity.”

It was evident that Medina made the most of his opportunity at Tallulah Falls.

“David took an opportunity at TFS to not just pursue an independent school education and play America’s National Pastime, but to invest in relationships with his teammates as he seeks to pursue faith and family studies in college so he can share the good news of Christ,” adds Athletic Director Scott Neal. “Highly relational, he integrates baseball skills, training, and the nuances of baseball with the important loyalty, interdependence, and unity necessary for any team to succeed. We are proud of him.”

Medina becomes the eighth TFS athlete to sign this season to compete at the college level, which is a new TFS record for a single year.