TFS has named the Indians of the Month for October 2022. This month's selections are Addy McCoy and Jackson Shadburn for high school, and Delaney Johnson and Henry Dumas for middle school. MORE INDIANS OF THE MONTH 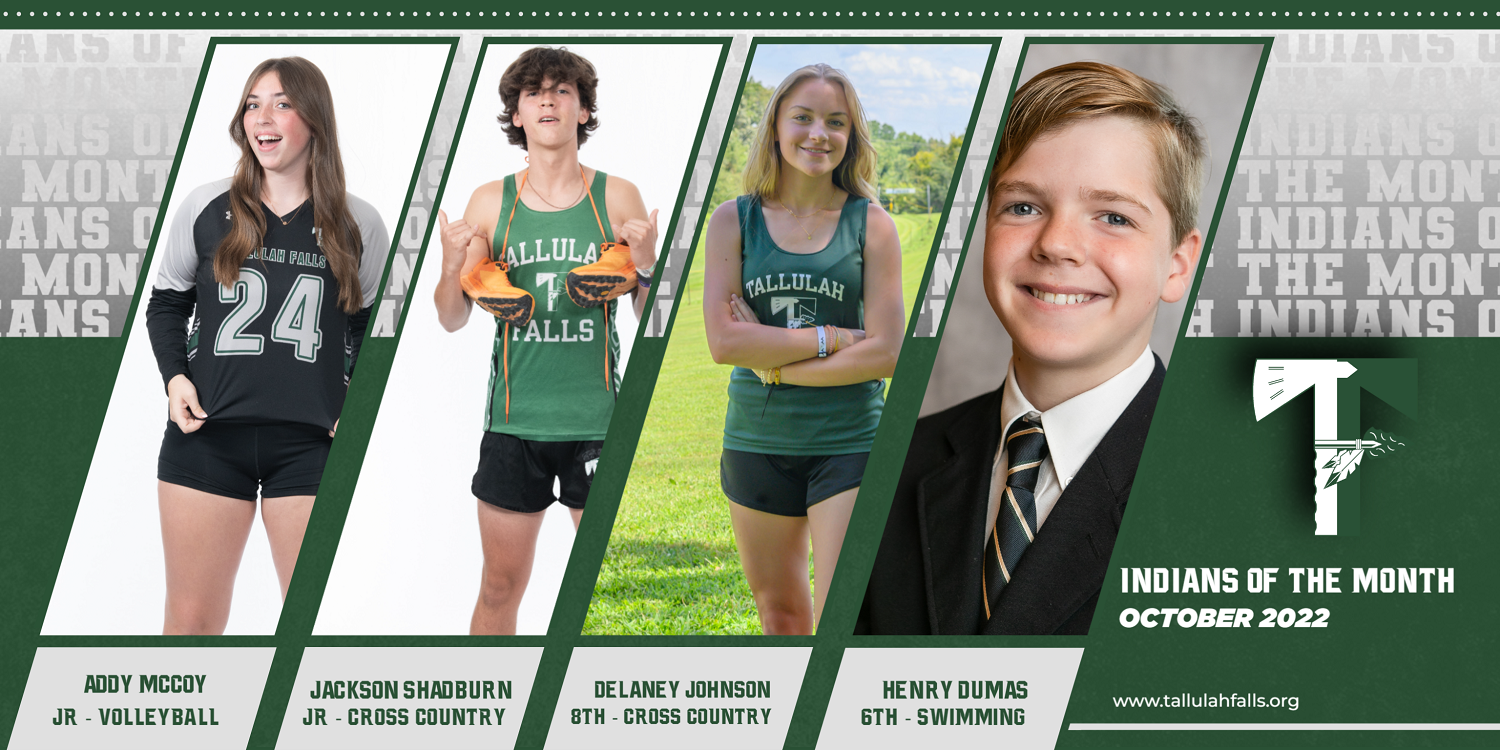 Addy McCoy has truly saved her best for last. Once the post-season hit with the region tournament and state matches, Addy has come alive in an incredible way. She was always one of the go-to attackers but during the post-season, she has the best hitting percentage by far and the most blocks on the team. What an amazing time to blossom in your season. Behind Addy's play, we have had the most successful post-season in Tallulah Falls volleyball history. -coach Matt Heyl

October has been a good month for harrier Jackson Shadburn. The junior ran his course best 20:48 on the TFS Farm course at the Harrier Harvest, trailing teammate Canon Brooks by less than a second. One week later at the Region 8A-D1 Championship, Jackson flipped the script by less than a second to place 21st while helping TFS to our fourth consecutive state berth. It was his team attitude at the Harrier Harvest that infused a distinct pack mentality that has carried over. Jackson has been diligent, patient, and purposeful throughout the season! -coach Scott Neal

Eighth-grader Delaney Johnson placed 22nd out of 277 middle school runners at the Mountain Invite, helping the team to 7th-place finish among 21 scoring schools, and 0.4 seconds behind teammate Avery Keim. Two days later, Delaney placed 2nd overall in a personal record time of 12:59.12 to lead TFS to the Tri-State XC Championship victory. Delaney then moved up to the 5K high school distance at the Harrier Harvest and placed 2nd in the JV division. Even though she had started the swim season, she followed that up a week later at the Region 8A-D1 JV race with a victory, beating all other runners. Delaney is focused, optimistic, and poised in her approach to practices and races. She has improved throughout the season, through both adversity and success, while demonstrating a pursuit of running excellence. She not only found a sport suitable for her strong mental toughness, her maturity as an athlete with fortitude has been inspiring. -coach Scott Neal

Henry is a go-getter at practice. He works to improve with every set and day, while also seeking feedback at appropriate times. Henry has also sought to improve his endurance with additional yardage by swimming in the mornings at optional practice. Henry always has a positive attitude & is respectful of his peers & coaches. -coach Rachel Nichols